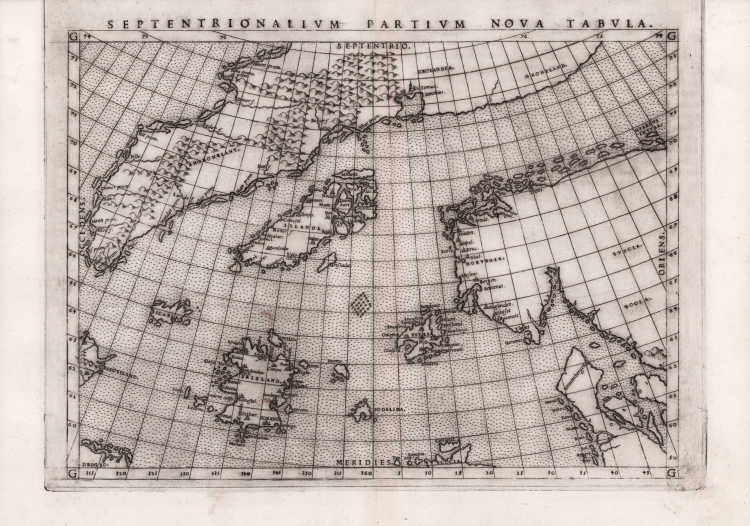 The most significant map in Ruscelli's atlas is his Septentrionalium Partium Nova Tabula map, which is based upon the Zeno map of the North Atlantic, first included in a 1558 travel book, which describes a pre-Columbian voyage to the New World in 1380 by Ventians Nicolo and Antonio Zeno. The map introduces many new fictitious islands in great detail, including Frisland (with 32 places named), Deogeo, Estotiland, Estland, and the monastery of S. Tomas in Greenland. Many of these mythical islands and places were depicted on maps for centuries, mainly because Gerard Mercator accepted Zeno's voyage as authentic and adopted much of it in his famous large 1569 world map and his 1595 map of the North Pole. Ortelius in turn used the map as a prototype for his map of the North Atlantic. Frobisher and Davis accepted the map for their explorations in the 1570's and 1580's, respectively.

The map first appeared in the 1561 Ruscelli edition of Ptolemy's Geografia.

Ruscelli edition of Ptolemy's "Geographia", printed in Venice from 1561 to 1598. Ruscelli's Atlas is an expanded edition of Gastaldi's Atlas of 1548, which has been called the most comprehensive atlas produced between Martin Waldseemüller's Geographiae of 1513, and the Abraham Ortelius Theatrum of 1570.

Ruscelli and Gastaldi's maps were beautifully engraved on copper, marking a turning point in the history of cartography. From that point forward, the majority of cartographic works used this medium. As it was a harder material than wood it gave the engraver the ability to render more detail. Gastaldi sought the most up-to-date geographical information available, making the modern maps in Ruscelli's Geographia among the best modern maps of the period. The maps are engraved by the Sanuto borthers.

A fine copy, in good condition.

P. Burden, The Mapping of North America, 29; W. Ginsberg; Printed Maps of Scandinavia and the Arctic, 19.