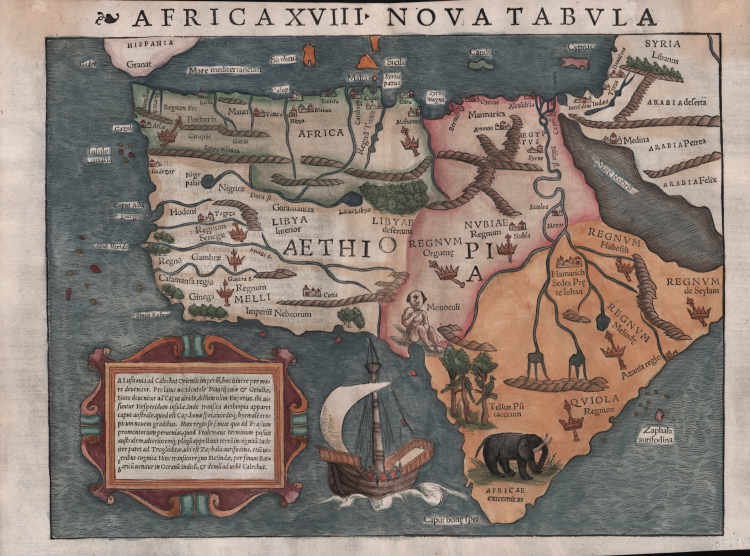 Richly evocative of its early period, it is embellished with a galleon in full sail, a relatively realistic elephant, parrots, and a Cyclops. The map "is based partly on Ptolemaic, partly on Portuguese and partly on Arabic sources" (Tooley), the overall shape of the continent having been derived from the Portuguese. Betz believes “a source for the interior of North Africa may have been the Descrittione dell‘Africa written in manuscript by al Hassan (Leo Africanus) in 1526).” As would be the case with virtually all 16th and 17th century maps of Africa, Munster’s depiction of the Nile and its headwaters follows that of Ptolemy, with the source of the White Nile presented as two lakes fed by streams emanating from Ptolemy’s Mountains of the Moon. In approximate accord with reality, another lake is shown as the source of the Blue Nile (though considerably to the south of Lake Tana).

This highly important map represents the earliest reasonably obtainable map to depict the entire continent of Africa. Africa XVIII, Nova Tabula, is a fantastic visual synergy of archaic imagination and recent exploration. The overall shape of the continent is quite well defined, having been extensively explored by the Portuguese since the time of Prince Henry the Navigator in the mid-fifteenth-century, a point highlighted by the appearance of a caravel in the lower part of the map. Africa's various kingdoms are denoted by pictorial symbols of a crown and sceptre. Following Ptolemaic tradition, the Nile has its source in a series of lakes that lie at the foot of the mysterious Mountains of the Moon. The land around the Cape of Good Hope in South Africa is embellished by the appearance of an elephant, and exotic parrots occupy trees in Angola. Most amusingly, near the coast of east Africa, the "Monoculi," or one-eyed man imagined by Classical writers sits in wait for some hypothetical European visitor.

Münster was a brilliant polymath and one of the most important intellectuals of the Renaissance era. Educated at Tübingen, his surviving college notebooks, Kollegienbuch, reveal a mind of insatiable curiosity, especially with regards to cosmography. Münster later became a professor of Hebrew at Heidelberg, and then from 1529 at the University of Basle. In the 1530s, he turned his attentions to translating Ptolemy's Geography, adding new material that related to the lands newly discovered in Africa, the Americas and Asia. The result was the publication of his highly regarded Geographia Universalis, first printed in 1540.