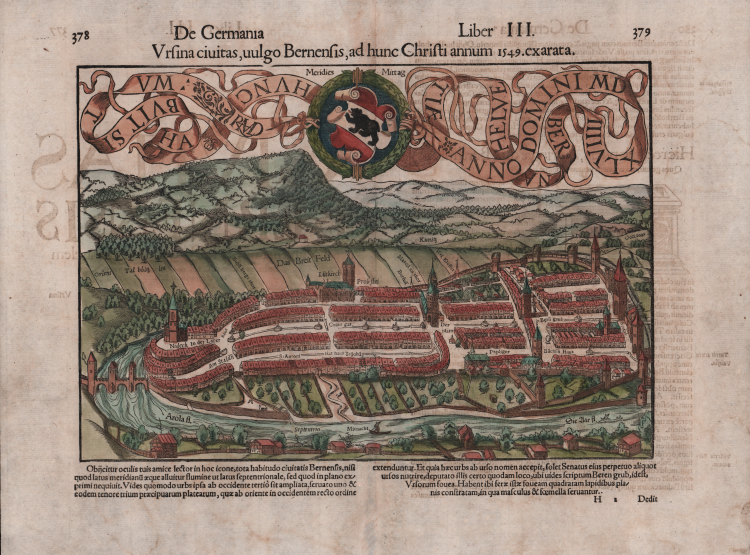 Plate taken from the Cosmographiae Universalis, German edition, Basel, second half of the 16th Century.

The Cosmographiae Universalis of Sebastian Münster (1488-1552), printed for the first time in Basel in 1544 by the publisher Heinrich Petri, was updated several times and increased with new maps and urban representations in its many editions until the beginning of the next century. Münster had worked to collect information in order to obtain a work that did not disappoint expectations and, after a further publication in German embellished with 910 woodblock prints, arrived in 1550 to the final edition in Latin, illustrated by 970 woodcuts.

There were then numerous editions in different languages, including Latin, French, Italian, English and Czech. After his death in Münster (1552), Heinrich Petri first, and then his son Sebastian, continued the publication of the work. The Cosmographia universalis was one of the most popular and successful books of the 16th century, and saw as many as 24 editions in 100 years: the last German edition was published in 1628, long after the author's death. The Cosmographia contained not only the latest maps and views of all the most famous cities, but also a series of encyclopedic details related to the known, and unknown, world.

The particular commercial success of this work was due in part to the beautiful engravings (among whose authors can be mentioned Hans Holbein the Younger, Urs Graf, Hans Rudolph Manuel Deutsch, David Kandel).