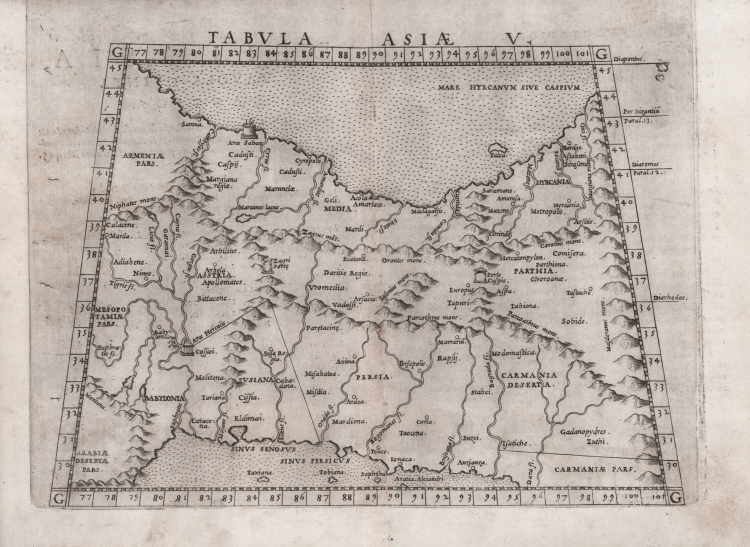 Ptolemaic map of the region between the Persian Gulf and the Caspian Sea showing Babylon and Mesopotamia as well as several ancient religious sites. The base of the Caspian Sea, also named the Hyrcanian Sea, is at the top of the map. Armenia is in the upper left, and the Arabian Desert is named in the lower left. Major mountain ranges, rivers, and cities are shown.

The map first appeared in the 1561 Ruscelli edition of Ptolemy's Geografia.

Ruscelli edition of Ptolemy's "Geographia", printed in Venice from 1561 to 1598. Ruscelli's Atlas is an expanded edition of Gastaldi's Atlas of 1548, which has been called the most comprehensive atlas produced between Martin Waldseemüller's Geographiae of 1513, and the Abraham Ortelius Theatrum of 1570.

Ruscelli and Gastaldi's maps were beautifully engraved on copper, marking a turning point in the history of cartography. From that point forward, the majority of cartographic works used this medium. As it was a harder material than wood it gave the engraver the ability to render more detail. Gastaldi sought the most up-to-date geographical information available, making the modern maps in Ruscelli's Geographia among the best modern maps of the period. The maps are engraved by the Sanuto borthers.