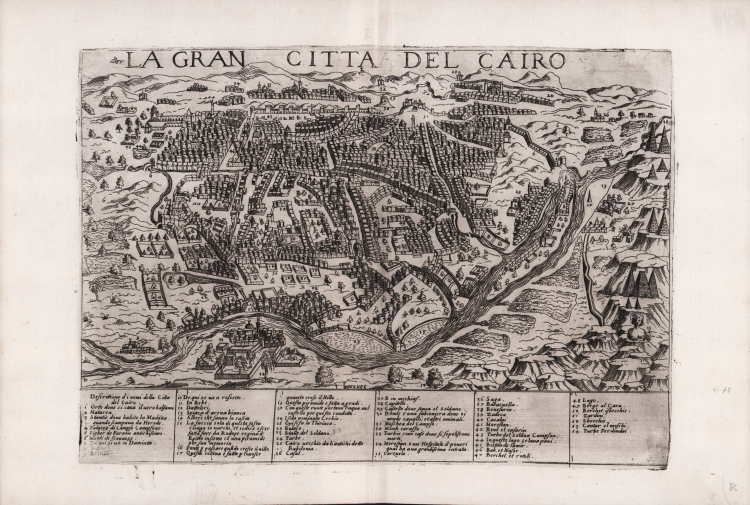 At the top, along the upper margin and printed in block letters, is the title LA GRAN CITTA DEL CAIRO. At the bottom we read: Descrittione d'i nomi della Città del Cairo. Follows a numerical legend of 54 references to places and monuments placed on six columns. At lower right is the editorial imprint: Appresso Donato Bertelli. Orientation in the four sides to the center with the names of the winds: TRAMONTANA, LEVANTE, PONENTE, while not indicated the southern wind. The north is on the left.

Perspective bird's eye plan, undated, published by the typography of Donato Bertelli. This is a derivation of the work attributed to Ferrando Bertelli (1568), in turn based on the larger one by Zorzi-Pagano, to which the orientation is added.

In 1549 Matteo Pagano, in collaboration with the painter and cartographer Giovanni Domenico Zorzi, produced a large map of Cairo, consisting of twenty-one silographic blocks. The perspective adopted, oblique from above, called "bird's eye", follows the Renaissance tradition of the representation of cities. The format is horizontal, with the city seen from the west bank of the Nile. Both individual areas and monuments of the city are clearly indicated, such as the Azbakiya district, the Bab Zuwayla gate, the aqueduct and main streets, Old Cairo, developed around the Babylon fortress, the Giza tower, the famous Pyramids, and the Sphinx in female likeness.

Some examples of this perspective plant are included in the collection Le vere imagini et descritioni delle piu nobili città del mondo, published in Venice by Donato Bertelli in 1569. Still others are included in sixteenth-century factual collections of larger format.

“In absolute competition with the collections of Forlani and Ferrando Bertelli, was published in Venice, again edited by Donato Bertelli in 1569, the collection Le vere imagini et descritioni delle più nobilli città del mondo. Verae illustrissimae cuiusque urbis imagines nunc prim[um] typis impressae. Venetiis, Apud Donatum Bertellii to signum divii Marci MDLXIX. Like Ferrando's, the work contains an engraved allegorical frontispiece, with a bilingual title in Italian and Latin, and a dedication to Iohan Jacob Fugger von Kirhberg (1514-1575), a German banker and patron of the arts: Illustri, ac generoso heroi d. Ioanni Iacobo Fuggero Kirchbergae, Weissenhorni, et c. domino caesareae maiestatis consiliario dicatae. The collection, which was reprinted in 1574 and again in 1578, includes the title and 21 plans or views of cities. It is, therefore, only a selection focused on the main cities, represented by tables derived from the "Primo Libro", already replicated in the Civitatum aliquot insigniorum et locorum of 1568. Images of Hungarian fortified cities and minor places are excluded, in a sort of elitist product, less innovative but more accurate from the graphic point of view. Valerio (cf. Piante e vedute di Napoli dal 1486 al 1599, 1998, p. 45) describes the copy preserved at the Jerome & Ann Fisher Fine Arts Library of the University of Pennsylvania [711.4 B486], dated 1569, and the reprint of 1578 preserved at the Public Library of New York. Both differ in content and arrangement of plates from the one preserved at the Angelica Library in Rome [BB-12-9] and the one at Stanford University, both of which bear the date 1578. The only common element in all editions is the presence of the plan of Venice (as the first plate. It is not uncommon to find Bertelli's plates preserved in large-format factual collections: in the collection of the Universiteto Biblioteka of Vilnius (cf. Dzikowski, Katalog atlasów Biblioteki Uniwersyteckiej Stefana Batorego, 1940) almost all the plates that make up the collection are present, as well as in the so-called "Atlas Aragon" (preserved in an anonymous private American collection and of which we have been able to obtain images). Numerous plates are present in the collection of the Bertarelli Collection [VOL EE 46 (1-240)], preserved at the Castello Sforzesco in Milan" (cf. Stefano Bifolco, Città e Fortezze Principali del Mondo. Le prime raccolte italiane di cartografia urbana e gli isolari del XVI secolo in “Cartografia e topografia italiana del XVI secolo”, 2018, pp. 124-125).

Donato Bertelli is a printer and publisher active in Venice in Merzaria all'insegna di S. Marco. He was probably born in Padua, as we can deduce from his signature on some branches, Donatus Bertellius Patavinus, his activity, on the basis of the works he published, can be circumscribed to the years between 1558 and 1592. In 1559 he was in the workshop of Ferrando Bertelli and signed In Venetia appresso Donato Bertelli libraro al segno del S. Marco. Upon Ferrando's death, Donato inherited or purchased his branches and published them, as he did also for plates by Forlani and Camocio, affixing his name.