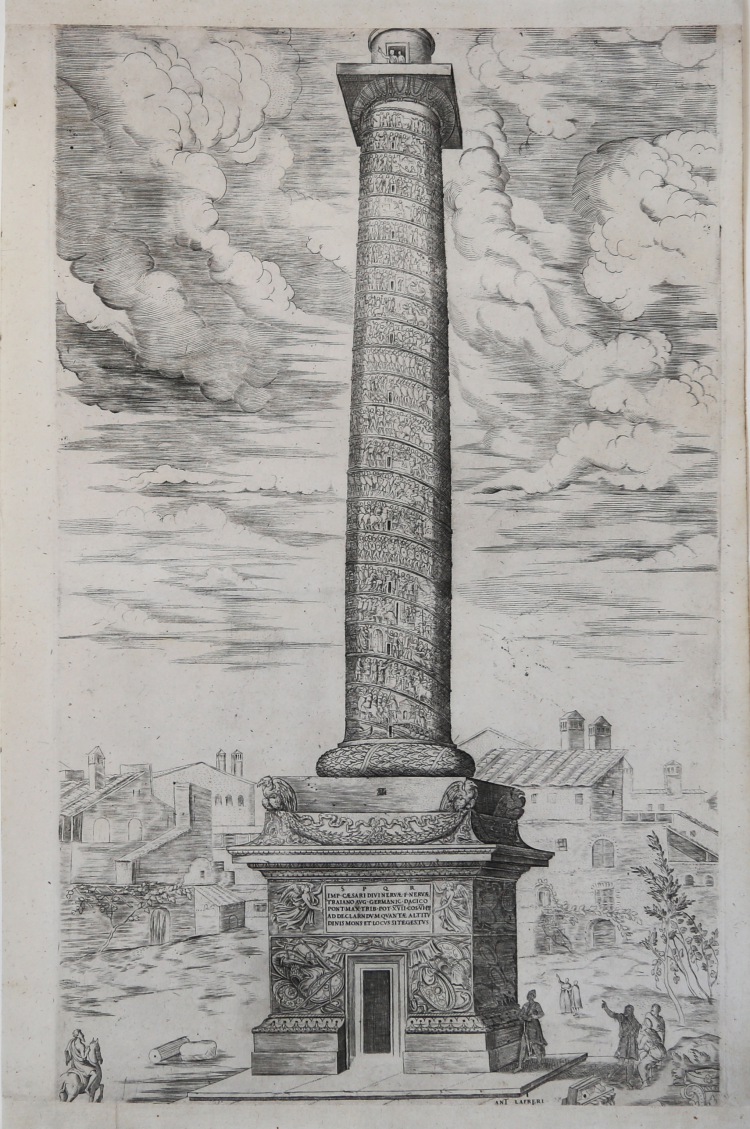 Example of the first state of three, before the address of Paolo Graziani and, therefore, of Pietro de Nobili (both unknown to Hulsen).

This is the edition of the Trajan Column following the one for the Salamanca types of 1540. The cochlide column occupies vertically the entire space of the plate, the image is inserted in an urban context. The print represents with sufficient precision the state of the ancient monument. Despite the apparent similarity between the engraving of the Lafréry and that of the Salamanca, in reality the scale of measurement, proportions and point of view are different. In fact, the engraving of the Lafréry is placed from a lower point of view reproducing a more grandiose effect of the base that appears larger, moreover there is a substantial diversity of the figurines below and the hatching of the sky differs greatly, and finally the scenes of the column are opposite to those represented by the Salamanca. (cf. Marigliani n. IV.11).

This print comes from the “Speculum Romanae Magnificentiae” (The Mirror of Roman Magnificence). The Speculum found its origin in the publishing endeavors of Antonio Salamanca and Antonio Lafreri. During their Roman publishing careers, the two foreign publishers - who worked together between 1553 and 1563 - initiated the production of prints recording art works, architecture and city views related to Antique and Modern Rome. The prints could be bought individually by tourists and collectors, but were also purchased in larger groups which were often bound together in an album. In 1573, Lafreri commissioned a title page for this purpose, which is where the title ‘Speculum Romanae Magnificentiae’ first appears. Lafreri envisioned an ideal arrangement of the prints in 7 different categories, but during his lifetime, never appears to have offered one standard, bound set of prints. Instead, clients composed their own selection from the corpus to be bound, or collected a group of prints over time. When Lafreri died, two-third of the existing copper plates went to the Duchetti family (Claudio and Stefano), while another third was distributed among several publishers. The Duchetti appear to have standardized production, offering a more or less uniform version of the Speculum to their clients. The popularity of the prints also inspired other publishers in Rome to make copies however, and to add new prints to the corpus.

Good proof, printed on contemporary laid paper, with margins on the sides and trimmed inside the copper in the upper and lower part, with partial loss of engraved part of about 2 mm. Overall good condition.