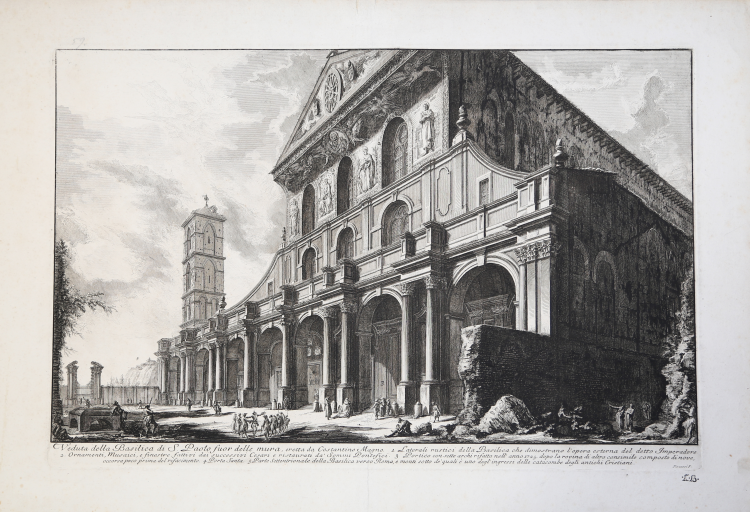 Etching and engraving, 1748 circa, signed on plate.

Taken from Vedute di Roma. The whole work consists of 135 plates which have been individually produced by Piranesi along 30 years, from 1745 circa until his death. Two more works have been subsequently added, two plates by his son Francesco. They have been printed for the first time in 1751 (34 plates) by the editor Giovanni Bouchard, afterwards by Piranesi himself, publisher first in Strada Felice an the in Palazzo Tomati, imprint that can be found in mostly of the plates), until the final edition of 137 plates. After Piranesi's death, his son Francesco inherited the plates, editing them first in Rome and then in Paris, where three editions were printed - the so-called "first Paris edition", an intermediate one (both on laid paper) and the one edited by the publisher Firmin Didot, the first on wowe paper, where the plates have an Arabic ordinal number added. All Parisi issues are rather modest in quality, far from how Piranesi had thought and conceived them. The plates were then acquired by the Calcografia Camerale, then Calcografia Nazionale, today Istituto Centrale per la Grafica, where they are still kept.