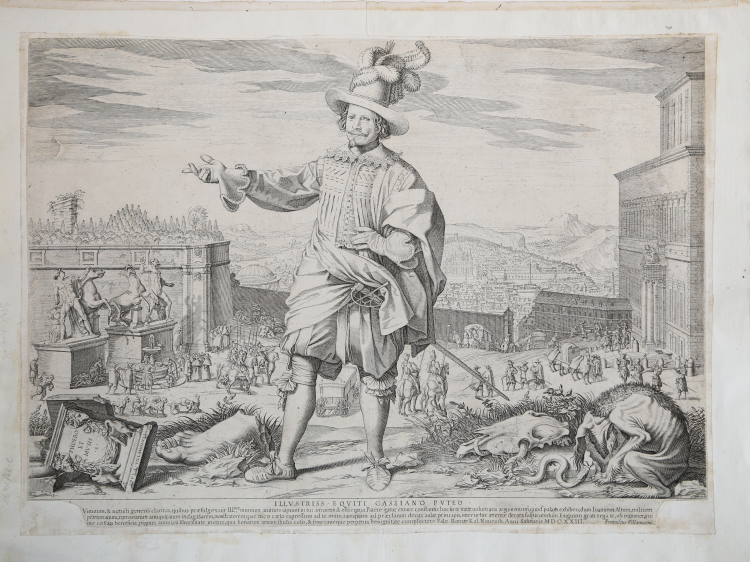 The Losi imprint was displayed on the lower left “Romae apud/ Carolum Losi/ Anno 1773”; on lower right corner there was the inscription “Superiorum/ permissu”

The full-length portrait is of the Swiss Guardsman Ioannes Altus, also known as Johann Alten, Johann Alt and Giovanni Alto. Altus is depicted in military costume, with a plumed hat and a sword in the Piazza del Quirinale. His right arm is lifted and he gestures to the viewer to look towards the antiquities behind him. He is surrounded by sculpture fragments, a skull, a snake and a starving animal in the foreground. In the background, figures mill around the square and the city is visible in the distance. The engraving is a 1773 reprint by the publisher and print dealer Carlo Losi from a 1623 work by Francesco Villamena.

“He is gesturing like a guide pointing out some aspect of the antiquities of the city. The text in the margin describes him as one who investigates the antiquities and shows them to people. To the left a great marble foot is placed next to his right foot, and further left a fallen altar is inscribed 'PHOEBO / ET / MVSIS / .s.'. On the right a snake curls through a horse's skull, flicking its tongue at a mangy dog (or perhaps a wolf?) next to a tomb slab inscribed D M (Diis Manibus). The serpent, perhaps a symbol of destructive time, seems victorious, and the grandeur of Rome has to be discovered amidst the bustle of ordinary life. The modern life of the city is not always salubrious, as is shown by the packs of dogs, beggars and people urinating in corners. The choice of the Piazza del Quirinale as the setting was presumably motivated not only by the view of Rome and the presence of great antiquities such as the Horse Tamers (there seems to be a umorous echo of one of them in Johann Alten's stance) and the remains of the Temple of Sarapis in the Colonna garden behind; in addition, the Quirinal Palace, seen on the right, had by this time become a principal residence of the popes and therefore a suitable place for a member of the Swiss Guard to be seen. St Peter's and the Vatican are given particular prominence in the background.” (Bury, The Print in Italy, n. I, p. 17)