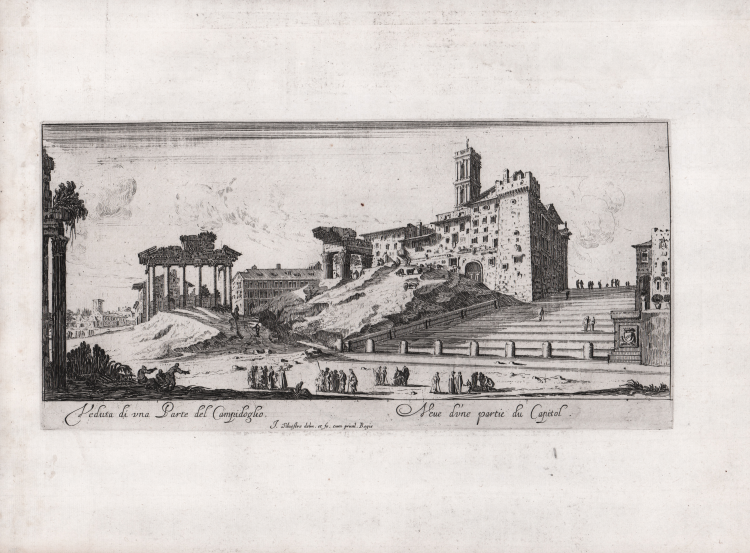 Silvestre, engraver and draftsman, was born in Nancy in 1621. As was customary at the time, he made several trips to Italy to copy the old masters and to improve his skills with the greatest masters. Faucheux fixes the dates of these trips, the first before 1640 (Israel was not yet 20 years old), the second from 1643 to 1644 and the last around 1653. Israel brought with him many views of Italy, almost all of them engraved. Until 1659, he made other trips to France and Lorraine, from which he took many drawings and engravings.

His style was, at the beginning, rather loose, but from 1643 onwards became more refined and delicate, acquiring accuracy and precision without being dry, resulting sometimes similar to that of Jacques Callot or Stefano della Bella, with whom he had friendly relations through his maternal uncle and mentor, the publisher Israël Henriet. Alongside the testimonies to ancient Rome, he soon showed great interest in the "modern" city, becoming one of the precursors of vedutism - not only in the field of engraving - anticipating artists such as Lievin Cruyl and Gaspar van Wittel.

It is impossible here to make a complete inventory of Israël Silvestre's works, so prolific was the artist. He left numerous drawings and more than a thousand engravings (see Faucheux Catalogue raisonné de toutes les estampes qui forment l'œuvre d'I.S.). However, among his most beautiful works, we can mention the many complex "small" suites (composed of a few plates) on the squares, churches and antiquities of Rome.