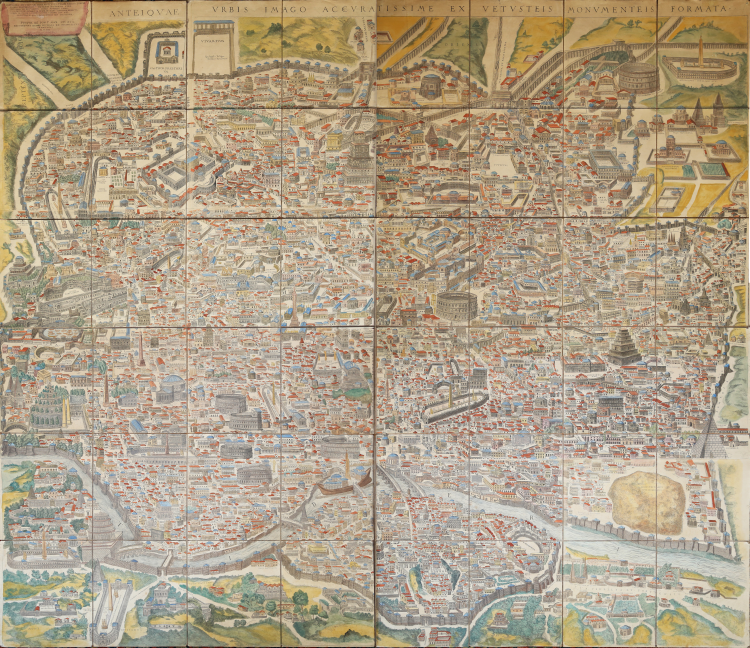 Archaeological map with vertical projection, with representation in elevation of ancient buildings. Designed and conceived by Pirro Ligorio, it is engraved by Jacob Bos for the publisher Tramezzino.

It is the great archaeological plant of Ligorio, the result of his valuable experience as an archaeologist, which had a great influence on the topographic production of the city for over two centuries. In order to elaborate this plan, he used his deep archaeological knowledge of the ruins of Rome, classical sources and a vast documentation consisting of inscriptions, bas-reliefs and ancient coins. For the topographic part Ligorio is based on the map by Bufalini of 1551.

Rome within the walls appears as a fanciful set of buildings, some of them known and still present and others that, although located with a certain accuracy, are undoubtedly the result of quite fanciful reconstructions. There is no lack of localization errors, such as the Roman Forum, erroneously located between the Capitol and the Palatine Hill.

The first state of the map is known only through the examples preserved at the British Museum and the Philadelphia Library Company. The ma was reprinted unchanged, about a century later by Gian Battista de Rossi. After another century or so (1773) Carlo Losi also made a reprint from the original plates, which were then acquired by Giovanni Scudellari and reprinted around 1820/30.

Orientation provided by the cardinal point SEPTENTRION, indication located in the upper left corner; the northeast is at the top.

Engraving, printed on twelve sheets, applied on canvas and folded several times. Exemple in the fourth final state, of the edition by Scudellari.