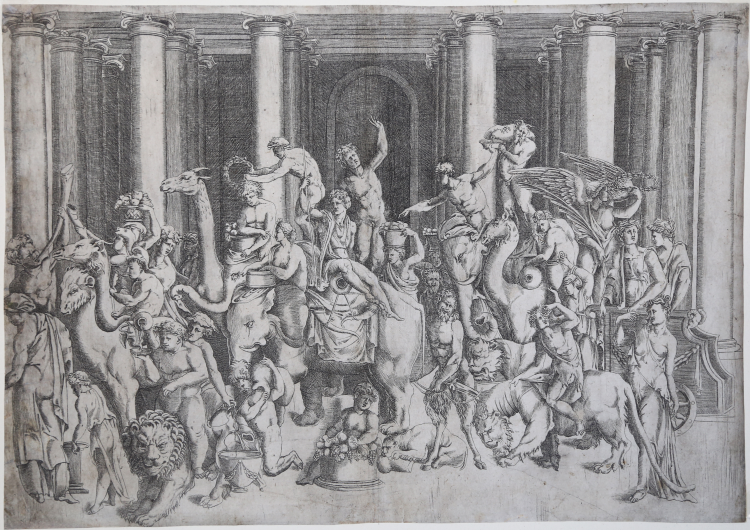 The scene, that shows Dionysos who rides in procession precede by captives on elephants and Dionysiac figures, is after a 2nd century AD Roman sarcophagus that was in the church of San Lorenzo fuori le mura by the end of the 15th century.  Today it is installed in the Casino of Aurora in the Palazzo Rospigliosi, Rome.

According to the Census of Antique art known in the Renaissance, Vico’s is the only 16th-century engraving of this marble.

Bartsch says that there is a copy of Vico's engraving with “many changes” and two inscriptions on the bottom: “Paules de la Houue excud” and “Jachis crinali florens etc”.  He also notes that Vico was so “negligent” that he didn’t finish the print and that it bears no inscription.

The engraving, as Massari notes (Iulio Bonasone, p. 81, n. 98) had been erroneously attributed by Cumberland to Giulio Bonasone. At the Uffizi (Gabinetto Disegno e Stampe, inv. 884) inventoried among Bonasone's prints is preserved another "Trionfo di Bacco" of Perin del Vaga's invention catalogued by Cumberland (n. 247) among the artist's engravings. The attribution to Giulio seems to us untenable on the basis of comparison with the analogous prints by Perin del Vaga, the style is in fact linked to Enea Vico who we identify as the author of the print.

Magnificent proof, printed on contemporary laid paper without watermark, irregularly trimmed at the copperplate, restoration in the left side of the sheet, small restored tear at the bottom center, traces of vertical fold visible on the verso, otherwise in good condition.