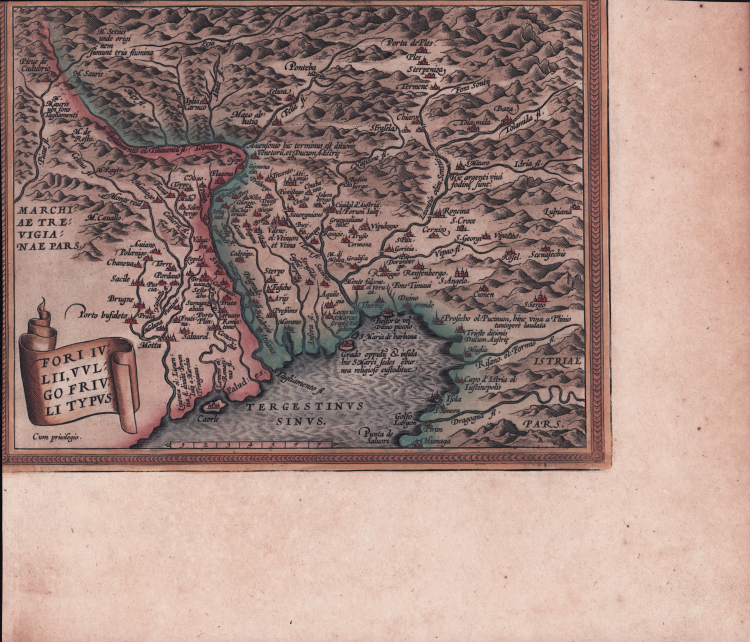 Map taken from Theatrum Orbis Terrarum, French edition. Originally the map of Friuli appears in a sheet with Lake Como-derived from that of Paolo Giovio-and with the map of Latium.

Cartographically it is a derivation of Giovanni Andrea Vavassore's map, which is the oldest printed map of the area. It is not certain, as some of the literature asserts, that it is directly derived from the manuscript made by the Udine painter Giovanni Antonio Cortona, which can be dated to before 1554. Guadagnino's work, in fact, is more accurate in its depiction of the mountain relief, as well as evident thoroughness in the dense reproduction of the basins of the three major rivers, the Isonzo, Tagliamento, and Livenza. The major differences with the Cortona model concern toponymy; in fact, Vavassore reports only the major settlements, castles, abbeys, shrines and strategic points of clear military and economic importance.

Map taken from the Theatrum Orbis Terrarum, which is considered the first true modern "Atlas". The work was published in 7 languages and 36 editions, for which - in 1570 - Ortelius obtained the privilege, a kind of copyright that prevented other cartographers from publishing his works. The Theatrum represented the most advanced work of cartographic description. Ortelius collected in it the geographical and cartographic knowledge of his time, proposing in 147 spectacular engraved plates the most faithful image of the world then known and, in some extraordinary "historical maps", regions and routes taken from literature, mythology, tradition. Ortelius was also the first to cite sources, mentioning the names of cartographers in the "catalogus auctorum". From 1598 to 1612 the posthumous editions of the Theatrum were made by his collaborator Johannes Baptiste Vrients.