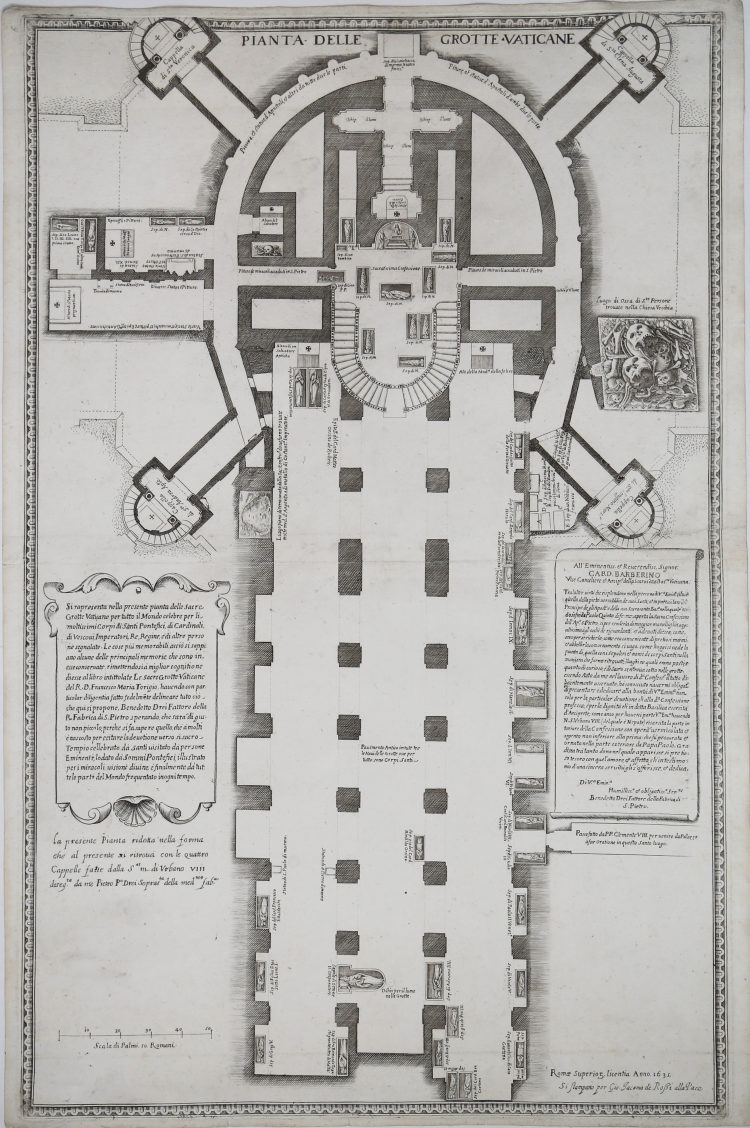 The print depicts the grottoes in plan, highlighting new construction (chapels, stairwells, oculi bringing in lite from the main floor) and showing the location of tombs (some with names of occupants, others labeled ‘unknown,’ some drawn as skeletons, others with bodies wrapped in linen cloth à la antique). Additional archeological details are (rather dramatically) illustrated, including a mound of excavated earth in which were found coins from the time of Constantine and a macabre collection of bones transferred to the grottoes from Old Saint Peter’s during its demolition. At the left is text in which Benedetto Drei explains the genesis of the print, and at the right is his dedication to Cardinal Barberini.

“During the excavations of the grottoes and confessio beneath the basilica ﬂoor in 1615, Benedetto Drei was present. It fell to him to make a careful record of the tombs that were found there. He produced an engraving, recording the ﬁrst discoveries made around the tomb of Peter, that was intended to illustrate the descriptions contained in Francesco Maria Torrigio’s Le sacre grotte vaticane” (McPhee, p. 344): “This plan is now exceedingly rare” (Barnes, p. 305). (Benedetto’s print was inspired by Torrigio’s important book, not meant to be included in it, as some bibliographers have incorrectly suggested.) “But excavations for the foundations of Bernini’s baldachin soon put Benedetto Drei’s engraving out of date and a revised version, adding the chapels beneath the crossing piers and further discoveries made in 1626 was issued by Benedetto’s son Pietro Paolo after 1638” (McPhee, p. 344): so the copperplate was altered to show the new pier chapels and other details. Pietro Paolo’s engraving retains the 1635 date of Benedetto’s original version, but carries the imprint of Giovanni Giacomo de Rossi, who is known to have taken over the De Rossi print business only after the death of his father, Giuseppe, in 1639.

Much of the excavation of the grottoes was completed by 1600, but the space remained a closed crypt, solitary and almost inaccessible, without defined functionality. Under Paul V Borghese (1605-1623) the grottoes received an organic and practical layout. In 1616-17 several chapels were completed and the grottoes connected to the Basilica by two stairways near the present-day piers of Saint Andrea and Saint Longinus. Under Urban VIII Barberini (1623-1644), four small oratories were built into the large piers supporting the dome which were connected to the main floor of the Basilica by stairways. These four new radiating chapels, with easy access to the Vatican grottoes, were designed and realized by Bernini.

“Over generations the [Drei] family steadily rose within the technical staff. Whereas Benedetto began his career in the trenches, excavating foundations and building walls, Pietro Paolo Drei began as a misuratore, essentially an assistant to the factor and soprastante in measuring the daily work of muratori and scarpellini. When, in 1637, Benedetto Drei died, Pietro Paolo rose to assume his position as factor. The larger administration of the Fabbrica gained immeasurably with this family lineage for as the jobs passed from father to son so did a host of learning concerning the basilica and its history – a priceless commodity for the frequently changing popes and their cardinals. The family Drei remained in place at Saint Peter’s for much of the seventeenth century” (cf. McPhee, p. 242).