Bacchanal with Putti Carrying an Ass 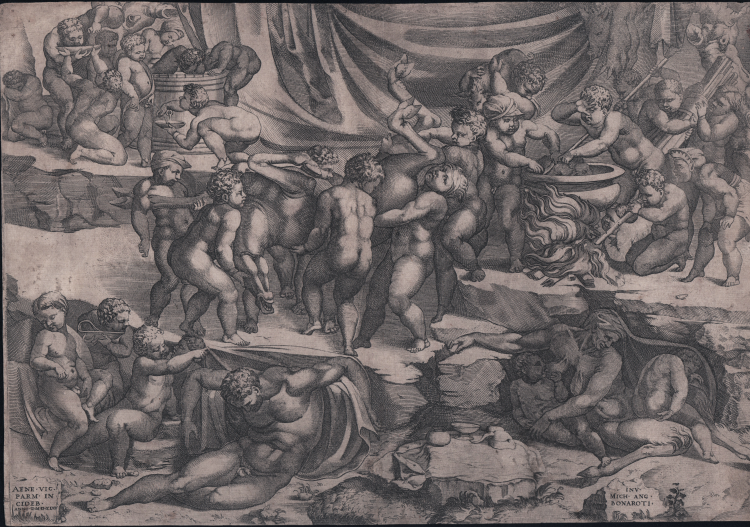 The engraving derives from Michelangelo's red chalk drawing in the same direction, executed in 1533 for Tommaso Cavalieri, today at Windsor, Royal Library, inv. no. 12777.

The scene takes place on different levels of a rocky site, probably a cave, on the bottom of which is spread a large cloth. At the center, a group of putti - one is female and is the only figure that in some way is facing the viewer - drags an animal, identifiable in a doe, to sacrifice. Above, on the right, another group prepares a pot to cook a pig, while on the left the point of attraction is a vat, from which wine is poured in abundance. The unbridled, uninhibited vitality of these groups contrasts with the resigned, sleeping tone of the foreground: on the left, a frazzled panisca is suckling a putto; on the right, a young man, for some Silenus, is abandoning himself to a state somewhere between sleep and drunkenness, while a putto arranges a cloth behind his shoulders; in the center, on an animal skin, the head of a kid, a goblet and a cruet are laid out.

The interest of the engravers and print publishers of the sixteenth century for the "Baccanaria" of Michelangelo, is testified by three different engravings, made between 1546 and 1553, by Enea Vico, Nicolas Beatrizet (undated) and the anonymous one edited by Lafrery (1553).

There is no doubt that the prints of Vico and Beatrizet are related to each other:

although both stay fairly close to Michelangelo’s drawing with regard to the figures, there are significant variations in the drapery folds in the background as well as in vegetation and rocks in the foreground – both areas that printmakers would typically feel free to elaborate.

It is difficult to determine with certainty which of the two engravings preceded the other, but it is likely that the Vico engraving is earlier.